Leadership, Improv, and High School: A Lesson in Being Yourself 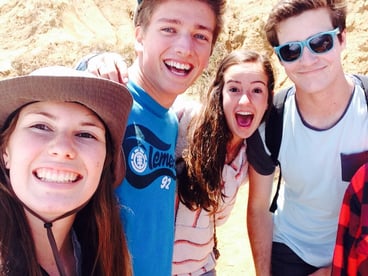 There’s something about the fall that’s special for me. Could be my October birthday, or my affinity for crisp, fall evenings, but I think it has something to do with it marking the beginning of the school year.

Like most kids, I bemoaned the end of summer growing up, but the start of school somehow signaled the beginning of an opportunity to engage with ideas and with people in a unique way. When mid-September and October rolled around, I would often be filled with a sense of optimism and feeling that anything could happen.

It was exactly that sense of optimism and excitement that filled the room during a leadership workshop I lead last month with 50 high-school students.

These were the freshman and sophomore classes of the Marin School of Environmental Leadership. I was lucky enough to be asked to facilitate one day of the three-day retreat they hold before the school year starts. A colleague and I partnered to deliver a workshop that blended leadership training with improvisation.

It was a tremendous hit—the kids had a great time and gained a deeper awareness of themselves and their leadership potential. The biggest takeaway for me was how easily they adapted to each other and to change. No matter how passionately they believed their own ideas were the best ideas, they seemed to naturally understand the concept that “our” idea was better than “my” idea.

The sentence I kept playing over in my head in the days after: "Strong opinions, loosely held".

This gave me a lesson in flexibility that I know I won’t soon forget.