Time to Take Control of the 360-degree Assessment Process 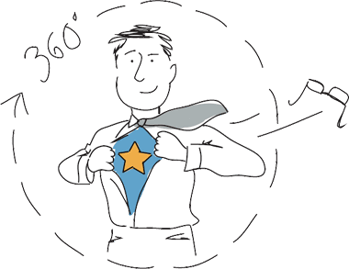 In the 1980s, General Electric CEO Jack Welch adapted 360 feedback surveys as the must-have development tool for grooming high-performers for leadership roles. Intended to collect candid insights into an employee’s performance from his or her colleagues, 360 surveys provide an opportunity for managers to engage in meaningful conversations with their team members at every step of their career.

Almost 30 years later, 360 surveys and assessments have become an integral part of the corporate HR feedback loop, but are they working? Despite their popularity it is not always clear how successful these 360 surveys are in creating space for employees to grow both professionally and personally.

What is clear is that 360 assessments can be profoundly effective tools for employee and leadership development, but only when the data gathered is easily understood, relatable and actionable. In most cases, however, leaders are faced with dots on a page that may look pretty and interesting, but offer little guidance for what it all means, or more importantly, what to do with it.

Ultimately, the widely-used 360 process would assist in colleagues knowing how they and their work is perceived by managers, peers, and direct reports. In a recent survey conducted by Leadership IQ, however, only 29% of employees say they ‘always’ know whether their work performance is where it should be. Consider then the possibilities of a 360 process that offers the right information at the right time, AND could actually be interpreted and acted upon by report recipients. Employees would have an opportunity to initiate their own career path to a sleeker, better, faster, and ultimately stronger version of themselves.

Leadership Landing's 360 and 360 Plus Assessments suite of customized coaching tools including tailored audio meditations, coaching exercises and videos will prepare you for your own path to greatness.