The Man Behind the Curtain

I love my job. As the founder and President of Leadership Landing, a management consulting firm with a single-minded focus on awakening great leadership, I am privileged to interact, on a daily basis, with the senior leadership teams from some of the largest and most successful companies in the world.

In my favorite role as executive coach, I am honored with a large number of deeply personal relationships in which I get to see, from a holistic point of view, what makes these exceptional people tick. I see it all. Their strengths and their weaknesses, their insights and their blind spots, their drives and their discouragements. I see the forces that propel them forward and the hindrances that hold them back. It is from these deeply personal connections and penetrating observations that I was able to identify a set of common characteristics that all great leaders share. I call this the Five Attributes of Great Leaders, and the five attributes are: Self-Awareness, Bravery, Kindness, Innovation and Inspiration. It is not the purpose of this essay to discuss them all in depth. However, as self-awareness is germane to the theme, we will pull it out and spend some time exploring it.

“Your visions will become clear only when you can look into your own heart. Who looks outside, dreams; who looks inside, awakes.”
- C.G. Jung

First and foremost is self-awareness. Leaders who are self-aware have a clear sense of identity, a clear sense of purpose, and a distinct, consistent way of interacting with others. Take a closer look at what I mean by each of these ideas.

"A clear sense of identity." They know who they are. They take actions, make decisions and pursue strategies in accordance with a strong set of personal values by which they are sure, above all, to be true to themselves.

"A clear sense of purpose." They know what they want. They set goals, envision outcomes, and forge organizations that align with their personal values.

"A distinct, consistent way of interacting with others." Because they are true to themselves, they are able to be genuine with others. As their personal interactions are always in line with their core set of values, their interpersonal behavior is steady and reliable. Their communication is direct and concise. As a consequence, they quickly build trust and earn respect.

Self-awareness, then, is at the heart of leadership. Without it, we are lost. And so it comes as no surprise that when I look at all the obstacles that hold my clients back, it's a self-awareness issue that I see the most.

The Man Behind the Curtain

"Pay no attention to the man behind the curtain!"
- The Great and Powerful Wizard of Oz

We all know the movie; we all know the scene. The giant flaming head is thundering orders at Dorothy and her friends, until Toto pulls the curtain back and reveals the wizard to be nothing but a foolish and incompetent fraud. To some extent, this man behind the curtain lives in all of us. He is the voice of doubt and insecurity. We know he's there, but we can plug our ears and bash ahead. 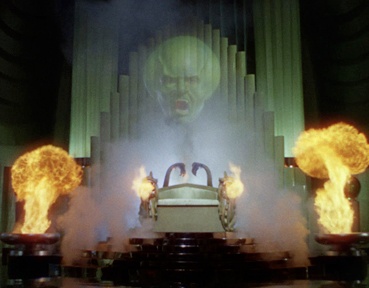 For some, however, he has taken over. He's convinced them that they aren't really good at what they do. He tells them they do not deserve the positions they hold nor the praise they receive. They have only risen to their current places by dint of smoke and mirrors, that they're nothing but a bunch of foolish and incompetent frauds, and that it's only a matter of time before someone pulls the curtain back and figures everything out. This inner voice of doubt and insecurity—this man behind the curtain—is what I've found to be the number one impediment to the growth and development of a leader.

Now, of course, a normal bit of doubt and insecurity is fine. In fact, a little bit of doubt can be a help as it can often be a motivator toward self-evaluation and improvement. And a healthy dose of humility never hurt anyone. However, there's an important difference between a healthy dose of humility and the running belief that you're an arrant fraud who deserves to be fired. That little man behind the curtain has to learn his place. And the leaders who allow him too much power are in trouble. They have strayed from self-awareness and can no longer see themselves objectively. They have become their own worst enemies.

Leaders who believe that they do not deserve their job cannot succeed. They might hold on to their positions for a time, but their effectiveness will be hampered and their growth will be limited. Why is this?

For starters, they believe that they need to lay low in order to avoid detection. If they call too much attention to themselves, they'll be found out for sure. And so they shrink away from bold actions, innovative suggestions, and creative risks—all of which are defining characteristics of a great leader and absolutely essential for their further career growth.

In addition, they can never really be themselves, as they believe themselves to be inadequate. Instead, they must put on an act and behave like someone else. They must build a facade and defend it at all costs. But doing so just serves to move them further from a place of self-awareness and further reduces their ability to lead. They seek approval instead of respect and likability instead of trust.

Now, this often works for a time. It can lead to a certain amount of success and can even result in a promotion or two. But that just exacerbates the problem because now, they believe, they are even more unqualified than they were before. The facade becomes harder to maintain. They exist in a constant state of anxiety and stress. They find themselves paralyzed, waiting for the other shoe to drop and for everything they have to be taken away. How can they lead? How can they look out for others when they are so consumed with protecting themselves? How can they be brave when their entire foundation is eggshell-fragile and the slightest mistake will send it crashing into pieces around them? How can they be kind when they are threatened by and suspicious of others? How can they innovate? How can they inspire? They can't.

The way to conquer the man behind the curtain is through self-awareness. Only when we're self-aware can we hope to value and appreciate ourselves for who we really are. There are many roads toward self-awareness and many tools to help you with the journey. These tools include private leadership coaching, 360-degree performance reviews, and the more contemplative approaches such as guided meditations and mindfulness exercises. I have had the privilege of assisting my clients with all of these powerful approaches and I am consistently amazed at the stunning transformations that are born through the process of becoming self-aware.

So, go ahead. You're waiting for you.